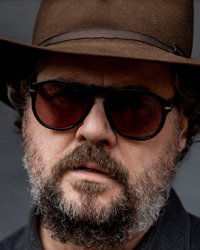 Opening Set by Alessandra Rose Debra Heesch and VCA are thrilled to welcome Patterson Hood back to Kay White Hall. Patterson Hood is a prolific writer and performer whose character-driven stories are packed with political subtext. He is best known as front-man, singer, songwriter and guitar player for the critically acclaimed rock and roll band Drive-By Truckers, but is also a writer of essays, columns and short stories as well as a solo performer and producer.

In the past few years he has written an op-ed on the on-going controversies surrounding the confederate flag for The New York Times Magazine, a piece on Vic Chesnutt for The Oxford American’s annual music issue, and retrospectives on David Bowie for American Songwriter and Merle Haggard for NPR. Most recently in October of 2016, Patterson published his first short story featured in “The Highway Kind,” a car-themed crime fiction anthology.

Drive-By Truckers have released 13 studio albums and played over 2,500 shows in the past twenty five years. They also released a 35-song, career-spanning box set in 2015 that was recorded live at The Fillmore in San Francisco. Their last three studio albums, American Band (ATO Records, 2016) and the recently released The Unraveling (ATO Records, 2020) and The New OK (ATO Records, 2020) have seen the band move into a more direct political and topical sphere of writing garnering praise from critics and fans around the globe. The New Ok was an unplanned album that came out of the social unrest around the Covid 19 Pandemic and was released in the fall of last year.