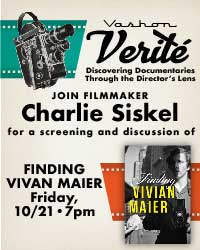 Required COVID Protocol Finding Vivian Maier This Academy Award nominated documentary film tells the story of a mysterious, reclusive nanny who took more than 100,000 photographs and hid them away in storage lockers, never showing them to anyone. Since the discovery of the images, Maier has been hailed as one of the great photographers of the 20th Century.

American Anarchist Thursday, Oct 21 | 7pm This story of one of the most infamous books ever written, “The Anarchist Cookbook,” the iconic counter-culture, bomb-making manual, and the role it has played in the life of its author, now age 65, who wrote it at 19 in the midst of the social and political upheaval of the late ‘60s and 70’s, tells a cautionary tale with parallels in today’s polarized politics.

Discovering Documentaries Through The Filmmaker’s Lens Our first featured filmmaker will be Academy Award and Emmy nominated director Charlie Siskel. Both screenings will be followed by a post-show discussion with Siskel about the subjects he has chosen, the inspiration he draws upon, and his journey as a documentarian.

Charlie Siskel is an award winning American film and TV writer, director and producer. Siskel’s documentary Finding Vivian Maier was nominated for an Academy Award, Emmy Award, Writers Guild Award, and Directors Guild Award. His film, American Anarchist, premiered at the Venice International Film Festival. Siskel’s earlier work as a producer includes the Academy Award winning film Bowling for Columbine with Michael Moore and the film Religulous with Bill Maher. Siskel’s television credits include documentary and comedy shows from the Emmy nominated The Awful Truth (also with Michael Moore) and Triumph the Insult Comic Dog Election Special to his own critically acclaimed shows Crossballs and Review on Comedy Central as well as Important Things with Demetri Martin and Tosh.0. As a former lawyer, his areas of legal expertise include media law, free speech and First Amendment issues. Siskel has been a speaker and has taught TV writing and production and legal topics through Columbia College and UCLA.
×

This is a general admission performance - the seats are on a first come, first serve basis when you arrive at the venue.

Doors open 1/2 hour prior to start of performance.