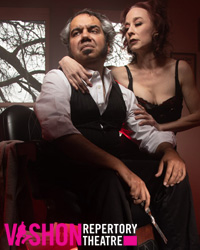 Vashon Repertory Theatre’s production of Stephen Sondheim’s musical version of an old English terror tale will showcase some of the Island’s best singing voices with Stephanie Murray in the late Angela Lansbury’s famed role as Mrs. Lovett, Miles Wingett as Perelli, Max Lopuszynski as Beadle, Arlette Moody as Lucy, and Brad Thomas as the demon barber himself. Christopher Overstreet will provide musical direction.

The play, lauded as one of Sondheim’s most original, earned Tony Awards for Best Musical, Best Book, and Best score, as well as the Olivier Award for Best New Musical in its 1980s Broadway run and codified Ms. Lansbury’s position as a Broadway theatre star.

Sweeney Todd tells the tale of an exiled and abused barber who returns to London fixed on revenge for the rape and suicide of his young wife years before. Todd teams up with Mrs. Lovett, a failed baker, to exact his vengeance and hide his deeds ‘in plain sight’ with Lovett’s help. Sondheim called the play ‘a story of obsession,’ and his friends agreed. Most often, Sweeney Todd is viewed as a satire on the most debased of human instincts set to some of Sondheim’s most complex and alluring songs. In whatever way it’s viewed, Sweeney Todd is an excellent display of Sondheim’s heart-stopping skill at capturing the highest and lowest moments in human experience and setting them to music.

It’s up to the audience – is it a tale of obsession, a satire on human evil or something else? Be sure you get your tickets so you can decide.